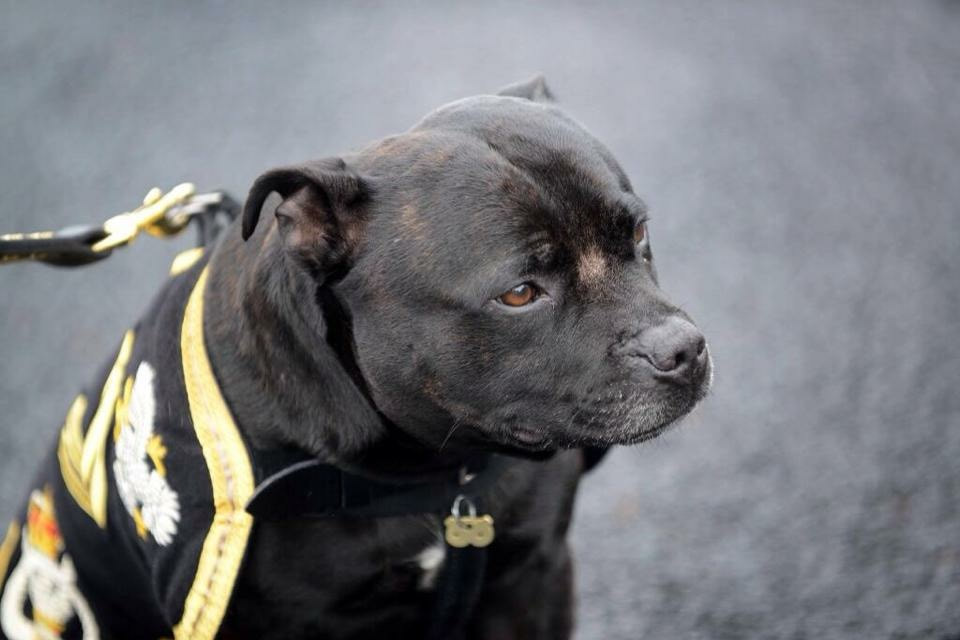 Watchman V
​Watchman is a military mascot of the now disbanded Staffordshire Regiment and the now withdrawn 3rd Battalion (STAFFORDS) of the Mercian Regiment.

Each successive mascot carries the name Watchman. When a mascot dies or a handler retires, another Staffordshire Bull Terrier puppy is chosen to replace him. When a Watchman passes away, they are buried with full military honours in St Edwards Square in Burton upon Trent, Staffordshire.

The Regiments of Staffordshire have had a Staffordshire Bull Terrier as their mascot since 1882. The Watchman name is a modern addition to the tradition, started after the Second World War. There have been five Watchman since 1949, the current mascot is Sgt Watchman V, who took up his duties on 5 October 2009.

Watchman has been a popular mascot of the Staffordshire Regiment and has attracted much public interest. The mascot holds the Freedom of many Staffordshire towns (or boroughs) including Tamworth and Newcastle under Lyme borough's.

Watchman is classified as a regimental pet and was not recognised by the Army or the Mercian Regiment. Since he is an unofficial mascot, his upkeep is paid for by the Staffordshire Regimental Association, not by the government or Mercian Regiment. Watchman attends events featuring the Staffordshire Regimental Association, where he has been invited by the parade organisers, or where he has been granted Freedom of the town or village. Although Watchman attends many public events, military ceremonies and regimental funerals in his own right.

However after the engines were started the train began to move the noise startled boxer, who leapt from the moving train and fell to the track. He was last seen by the men lying dead or unconscious at the side of the track.

After the regiment had arrived at Assiut, and having waited several days for orders for the final phase of their march, boxer staggered into their camp looking very thin and exhausted. He collapsed at the men’s feet after he had walked over 200 miles through the desert along the rail tracks to get back to his regiment.

From this point onwards the Regiment adopted the tradition of a Bull Terrier as a mascot. This continued with the battalions until after the Second World War, where the tradition changed to include the mascot carrying the name "Watchman".

The first Watchman, Watchman I, was presented to the 6th Battalion the North Staffordshire Regiment in 1949. They received their new mascot for being the highest recruited infantry battalion in the Territorial Army. Watchman I was all white.

Watchman began his duties and accompanied the regiment to the Royal Tournament in Olympia on 25 May 1949. Watchman I showed little interest in the event until the band and drums struck up and began playing. Upon hearing this Watchman I raised his head and began to march to wide public applause.

Over the next ten year of service Watchman I took part in every parade with the battalion. Watchman I was presented to Her Majesty The Queen during a royal visit to Burton-on-Trent on 28 March 1957.

Watchman I died in 1959 and was buried in King Edward Square Burton-on-Trent, the future burial ground of Watchman II, III and IV.

The popular public affection for Watchman I, along with the established tradition, interest and popular feeling of the people of Burton towards him resulted in Watchman II being presented to the Regiment in September 1960. Watchman II was a gift from the town of Burton upon Trent at a civic parade.

Watchman II marched at the head of the battalion for the next six years. He was presented to Her Majesty The Queen on the occasion of the Presentation of New Colours to the 6th North Stafford's and 5th South Stafford's, and a Guidon to the Staffordshire Yeomanry at Molineaux in the early 1960s.

Watchman II took part in the Honorary Colonels Parade held at St Martins Camp in 1966, which was to be his last parade.
In 1967 the County Territorial Army Regiments were reformed. This meant Watchman II went into retirement until his death in 1974, aged fourteen years old. He was buried alongside Watchman I in St Edwards Square, with a commemorative plaque placed onsite.

Following the death of Watchman II, the regimental family felt that the time honored tradition mascot should continue. After a search to find a dog of the correct pedigree the town of Burton upon Trent again presented the Regiment with a new mascot, Watchman III, in 1988. Watchman III went on to serve until his death 1998. He was buried alongside Watchman I and Watchman II in St Edwards Square, Burton upon Trent.

Watchman IV attracted such attention when his handler took him for a walk through the streets of London. A coach full of tourists pulled up and leapt off the vehicle to photograph him.

Watchman IV was buried with full military honours in St Edwards Square in Burton upon Trent on 5 December 2013. He rests along previous Watchman I, II and III.

Like previous Watchman he proved to be a very popular mascot and was awarded Freedom of numerous villages and several towns in Staffordshire, most notably Tamworth[8] Borough in 2014 and Newcastle under Lyme Borough in 2016.[9] He also holds the Freedom of Uttoxeter, Heath Hayes and Wilmblebury, and Hednesford. As part of the Regimental Association he also holds freedom of many other places such as Cannock, and Hanley, in Stoke on Trent.

The granting of Freedom to Watchman and his handler by several major towns in Staffordshire was part of a campaign by Staffordshire politicians, led by Cllr Robert Pritchard of Tamworth Borough Council, to ensure the Watchman tradition continues, now the 3rd Battalion of the Mercian Regiment (STAFFORDS) had been withdrawn and the Staffordshire Regiment has been disbanded. Such was the pride and affection for Watchman, the Staffordshire civic community wanted to ensure he could continue to parade with the Mercian Regiment in their own towns, as he is not their official mascot.
​​
In 2016 Watchman was entered into the "Westminster Dog of the Year" competition by Staffordshire MPs Amanda Milling, Christopher Pincher, Jeremy Lefory, Andrew Griffiths, Gavin Williamson, Michael Fabricant. It was the first time a military mascot has been entered into the competition. The MPs organised a public campaign to help Watchman V win the public vote element of the competition. The final was held in Victoria Tower Gardens on Thursday 8 September. Sgt Watchman V won the public vote in the competition and was crowned the 2016 competitions "paw-blic" vote winner.

In October 2016 Watchman V's handler, Greg Hedges, was shortlisted for the Express & Star "Big Thank You" awards in the Ambassador of the year category. The winner, chosen by a public vote, was announced in February 2017. Watchman won his category.

At the Field of Remembrance ceremony held at Westminster Abbey on 10 November 2016, Watchman was introduced to HRH Prince Harry and HRH Prince Philip. Watchman and his handler also featured in the Royal British Legion's Festival of Remembrance event, broadcast on BBC1, broadcast on Saturday 12 November. This was on a section covering the experiences of soldiers from the Staffordshire Regiment in the 1st Gulf War.

Watchman V currently holds the rank of Colour Sergeant. He was promoted to sergeant as part of the 2015 St Georges Day celebration held in Tamworth Castle Grounds and Colour sergeant on 21 December 2017 at the Kings Head Pub in Lichfield, as part of the Ferozeshah day celebrations.

Watchman V also has a range of merchandise made in him image for sale at the Staffordshire Regiment Museum, which include soft toys, keying's, pin badges and mugs.

It was announced on Watchman's Facebook page on 17th September 2018 that Watchman V is retiring earlier than expected and that he will be replaced by Watchman VI. Watchman VI is distant cousin of Watchman V and a gift from breeders Wayne and Karon Jackson, 'JACKABYTE' Staffords.
​
The official presentation ceremony took place in St Pauls Square in Burton-upon-Trent on Wednesday 17th October 2018 at 11.30am. Watchman V and VI will parade together for a period of time before Watchman V formally retires and his duties pass to Watchman VI. His handler will be Greg Hedges, handler of Watchman V. 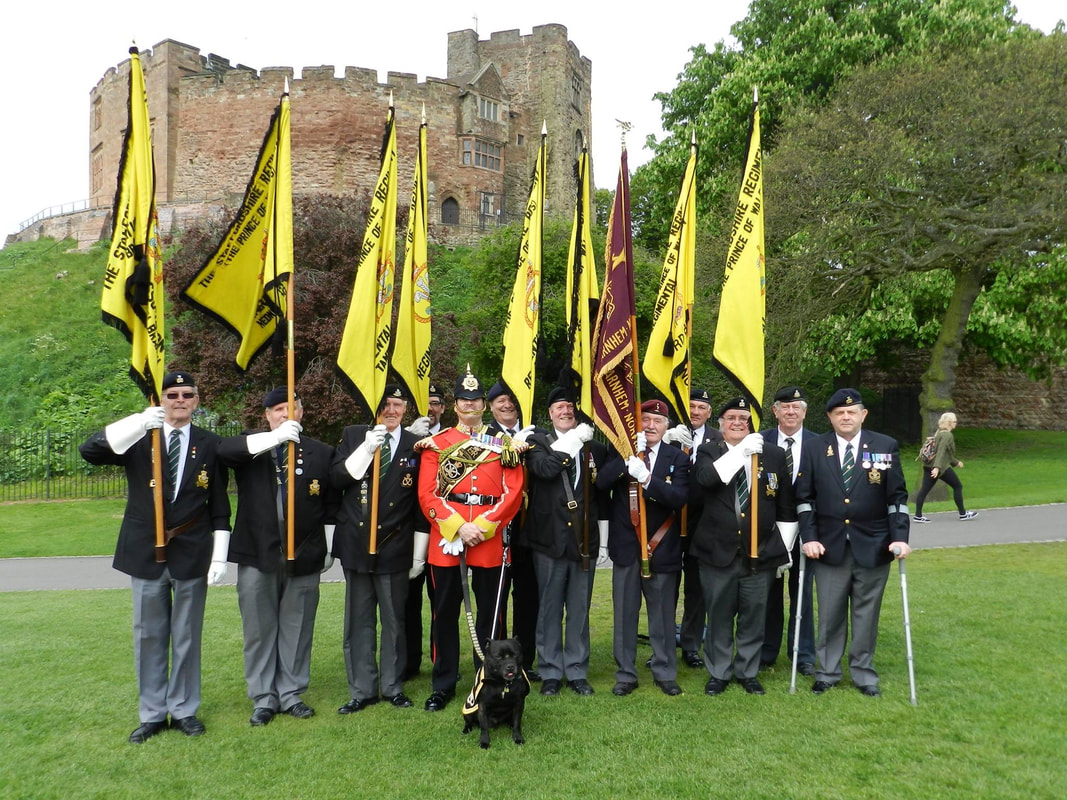 Watchman V in Tamworth
Powered by